An IVOS II has arrived at our lab

This month, the team at Dyneval was delighted to receive, and be trained to use, an IVOS II sperm analysis system, complete with IDENT technology, from IMV technologies. Dyneval invested in this new technology to deepen our research capability in Semen Analysis.  In particular, we are interested in exploring methods for semen analysis in a range of extenders.

The IVOS II, recognised as one of the best computer-aided semen analysis (CASA) systems in the market, is used by top laboratories for its high performance.

The IDENT technology allows us to discriminate sperm from debris to characterise sperm in the most challenging samples. 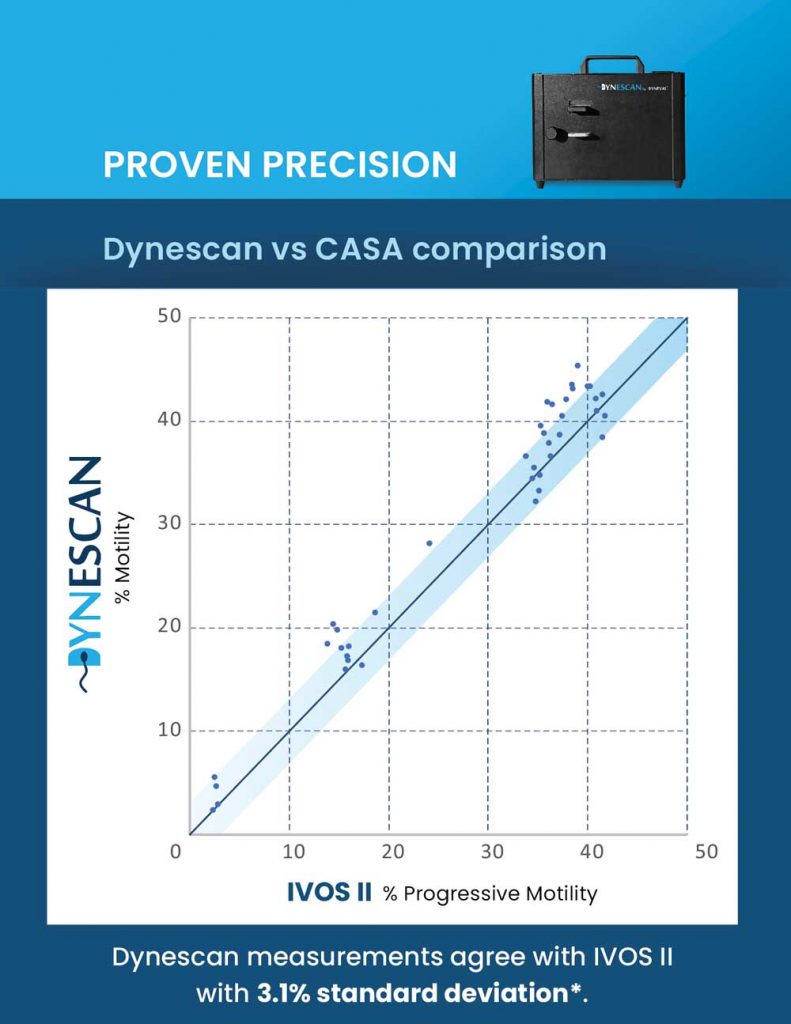 Our scientists find an excellent correlation between the percentage of progressively motile (> 20 µm/s) measured using Dynescan and an IVOS II Computer-Aid Semen Analysis (CASA) system.  All 42 data points collected are shown.  Dynescan measurements showed a standard deviation (SD) of just 3.1% compared to the CASA’s analysis. This SD is comparable to the differences between trained users using different CASA systems

Dyneval was founded in April 2020 by Tiffany and Dr Vincent Martinez, both complex fluid physicists who have researched the motion of tiny particles at the micron scale for over two decades.  The technology behind the Dynescan is completely different to traditional CASA systems which track the movement of sperm cells between video frames. Instead, the Dynescan derives measurements of the mean speed and percentage of progressively motile spermatozoa from the speed of fluctuations of light passing through a sample of semen.

Powered by Dyneval’s proprietary software, the Dynescan delivers reliable measurements of the percentage progressive motility (% motility) and spermatozoa’s mean speed (micron/second).  It is portable and automated so lab-quality measurements can be performed by anyone, anywhere.  Designed for dual-mode operation, the Dynescan allows for visual inspection in addition to automated, objective measurement.

Please get in touch to learn more about Dynescan or to request a demo.

You have successfully subscribed!

Go back to home